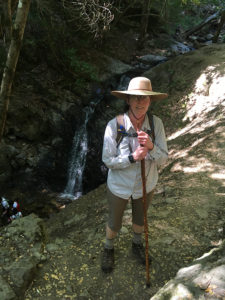 The need for a Technology Shabbat

I was a bit late to the whole smart phone phenomenon. I got my first iPhone (4S ) in late 2012 and fell head over heels with all the apps that kept me busy: checking into 4Square; Yelping the great meal at the new neighborhood restaurant, and so on. I began using  social media apps  to market the library and also introduced Twitter to my students around that time.  After a few years,  I realized that darn phone was taking over my life and I needed to take regular breaks from it. Now, I turn off my phone every day for about an hour–usually around lunch.   On the weekends, it is off even longer, and it helps me keep my balance.  This change in my technology habits coincided with a visit to our campus by Webby Awards founder Tiffany Schlain. Below, she describes the Technology Shabbat she and her family experience every week.  I now take mini-Shabbats every week.

Heather nailed it when she described unplugging was all about compartmentalizing: when you are with family, be with family; when you are at work, concentrate on the project at hand; when you are driving, just drive. I check my social media maybe 3-5 times a day (Twitter, Instagram) and I’m OK with that.  I’m not sure others are, but so far I haven’t lost any friends and my work colleagues know they can text me if there is something urgent. If my phone is off, I guess they can come and knock on my door.  What a concept!

When my phone is off or not on my person, I’m either in my kitchen trying out a new recipe, hiking in the Santa Cruz Mountains, conversing at the local coffee shop, swimming, or reading.  In these rituals, I try to engage all five senses and my imagination. It’s about recharging some ancient human need–to engage in the world around me and observe the experience.  Corny? Yea. If I every come up with a more imaginative analogy, I’ll edit this post 🙂

In this week’s Reflective Writing Club post for @One, I reflect on the use of digital technology throughout my career and how it has impacted my professional life.

Fire up the Tardis…

My first professional library job was clipping print newspaper articles and filing them in manila folders by subject. At this  same job, I was also dialing in to large databases like Lexis/Nexis, Dow Jones and Dialog,  the “keepers” of information pre-internet.  It was a strange juxtaposition of duties, but we were not very trustful of the online retrieval business yet, ergo the clippings!  Also searching online at that time was stressful because you were being charged for every minute you were logged in and it was not surprising to run up a $200 bill in a few minutes. Because of this unique skill, I was hired on at several corporations to work in their competitive intelligence / market research libraries.

Then came the internet

Many of the third-party vendors that acted as middlemen went out of business. The  original content generators (newspapers, government agencies, companies) were now publishing the content on their own and didn’t need an intermediary to sell their content on the web. Companies decided they didn’t need librarians; analysts could do it themselves and so corporate libraries were closed. In time, some companies realized they did need specialists to critically evaluate information and make informed decisions on what content to share with the decision-makers. Some organizations brought back their corporate research teams, while others contracted out to consulting firms.

I landed at a company that valued the corporate librarian and I learned how to use Dreamweaver and Photoshop. I was put in charge of the company’s market research web site in the mid 1990s- 2002.  Several years later I landed in academic librarianship and took classes with @One (their homepage from 2010!) on how to create movies with iMovie and  store them at 3C Media Solutions then link to them from my Angel LMS course. It was my first attempt to connect to students outside of the textual world.  Then, suddenly we had YouTube and smartphones and the world of digital technology suddenly seemed to expand amazingly fast.

Making the connection with students

I flirted with podcasting in 2008, but it was a very time consuming venture (at least then).  My greatest success was using Screencast-O-Matic to record my feedback to students’ assignments.  There was an amazing turnaround in my success rates when I actually showed students on the screen where they needed to make corrections.  Sometimes I added my live image in the corner (as long as my background was tidy).  Now that we are using Canvas, the ability to give video feedback is built in!  With Zoom, I conducted a synchronous online library orientation with an Art History class that was recorded and saved for future classes. I hope to do more of those in the future.

The effect on me

I believe I have become a more empathetic online instructor. Connecting to students via Zoom or YouTube has opened up a line of communication that I never had with an online student until I started using these tools. For them to hear my intonation and see my facial expressions allows my humanity to come through and seeing students respond in a reciprocal way–whether that is with voice or video–shows that a connection has been made.  To paraphrase from Michael Stephens of SJSU’s iSchool, we’ve been hyperlinked through the nurturing of connections and conversations as well as the embracing of participatory learning, transparency and change.

There is so much to learn and to share.  I’m glad to have the opportunity to learn from all of you in this unique PLN.  I just have one question: can someone please tell me if it is easier to create podcasts now than it was in 2008? 🙂